Multiple Intelligences:
Learning from Your Strengths

Discover the multiple intelligences that come most naturally for you and learn how to apply these strengths to your learning tasks. 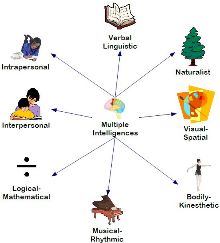 in which he proposed that there are multiple ways in which we are "smart," not just the verbal and mathematical intelligences captured on traditional IQ tests.

Using a variety of approaches to learning

Gardner's theory has had a profound influence on forward-thinking educators because it has helped them understand the importance of tailoring their instruction to individual learners, of using a variety of approaches in their teaching, and of using learners' strengths to help them improve in the areas in which they are weak.

Gardner says that all human beings possess each of the intelligences, but each of us is more attuned to some than to others.

When we know which ones come most naturally to us—and which require more conscious effort to develop—we can create strategies for learning that will go far toward helping us achieve our learning goals.

Below is a brief description of each of the intelligences.

Verbal-Linguistic intelligence has to do with words—both written and spoken. It describes people who can express themselves clearly and easily in essays, articles, books, and debates.

People who are strong in verbal-linguistic intelligence often have a gift for learning foreign languages, teaching, telling jokes and stories, and delivering passionate speeches. They learn best through reading, writing, listening to lectures, and debating topics with others.

Logical-mathematical intelligence has to do with numbers, logic, deductive and inductive reasoning, and abstraction. It describes people who are good at calculating, scientific reasoning, and mathematics.

People who are strong in logical-mathematical intelligence are often good at computer programming, playing chess, and accounting. They learn best when they can turn information into formulas, calculations and precise dimensions.

Visual-spatial intelligence has to to with the sense of sight—both in the outer world and in the mind. It describes people who notice visual details, can visualize whole scenes in their minds, and have excellent visual memory.

People who are strong in visual-spatial intelligence often have excellent hand-eye coordination and gravitate toward artistic pursuits such as painting, photography and design. They learn best when they can make mind maps, pictures and graphs of what they are learning.

Bodily-kinesthetic intelligence has to do with learning through the body, through physical movement and manipulation. It describes people who are good at building things with their hands and who have an innate "muscle" memory that allows them to remember dance steps, football plays, and gymnastic routines.

People who are strong in bodily-kinesthetic intelligence often build things with their hands and have a great deal of physical dexterity. They tend to enter such professions as mechanical engineering, surgery, sports, dance, and crafts such as cabinetmaking and pottery. They learn best by getting up and doing.

Musical-rhythmic intelligence has to do with music and hearing. It describes people who are especially sensitive to sounds, rhythms, tones and melodies. Such people often have perfect pitch, and they develop great talent in playing musical instruments, singing, composing and conducting.

People with musical-rhythmic intelligence learn best when music is playing in the background. They may also learn well through lectures, audio recordings, and oral storytelling.

Naturalist intelligence has to do with the world of plants, animals, and physical features like mountains, rivers and oceans. It describes people who love taking care of animals, growing gardens, and spending time in nature. Such people are often particularly sensitive to changes in weather and seasons.

People with a strong naturalist intelligence often gravitate toward careers in forestry, oceanography, farming, plant nurseries, and veterinary medicine. Similar to their bodily-kinesthetic cousins, they learn best by doing—especially if it is outside and connected in some way to nature.

People with a strong interpersonal intelligence often make wonderful teachers, counselors, coaches and therapists. They have a knack for managing others and may also be excellent politicians. They learn best by working in teams with others.

Intrapersonal intelligence has to do with the ability to think deeply and introspectively. It describes people who gravitate toward philosophical and metaphysical questions, who spend a lot of time alone seeking answers to some of life's most important questions. In contrast to their interpersonal cousins, they are often introverts.

People with strong intrapersonal intelligence often have a deep sensitivity to the spiritual realm and make excellent philosophers, writers, theologians and counselors. Because they need a lot of time alone, they tend to learn best when they can work alone in the peace and quiet of their own rooms and offices.

Knowing the multiple intelligences that come most naturally to you will help you understand how to approach learning in the ways that are most successful for you.

David Lazear, an author and trainer who specializes in multiple intelligences, has created a fun, free self-assessment that will help you understand which intelligences are your strongest (and weakest).

David has also written a great book filled with learning strategies for each multiple intelligence. To learn more, go to: OutSmart Yourself!: 16 Proven Multiple Intelligence Strategies for Becoming Smarter Than You Think You Are

Now that you know the learning styles and multiple intelligences that come most easily for you (and those that do not), the next step is to:

Discover How Emotions Affect Your Ability to Learn

Sign up today for Conversations, Learning Doorway's free monthly newsletter. Each issue brings you news, tools and techniques that will help you improve your creativity and your ability to learn.